Be it for a short vacation, or staying in your forever home, you will always feel welcomed by the Turkish community. You may not share a common tongue or clothing. You may have no idea how to purchase groceries, or order food. Once your neighbours take a notice on your troubles, your empty fridge will slowly fill up with pots and plates of local foods. Although “getting rid of strangers” culture is everywhere in the world, Turks are the ones who stop and listen and see if they can help you in any way. Since they have always been at the center of trading and migration routes, Turks have borrowed cultures, mimics, food, as well as lifestyles of everyone who visit them.

As we mentioned in our Lifestyles of Istanbul guide, the bus passengers especially have created their own slang during their travels. Every driver is a “Captain.” Passengers usually have to yell to inform the driver, if they wish to step down on a busy interaction among the crowds. “Captain, open the back (or middle) door, please.” is now a part of daily commute everywhere in large cities like Istanbul. Although modern busses have stop buttons, MiniBuses still operate a crowded Van with no other option to warn the driver expect calling them out. This concept of assigning a professional title to everyday roles have jumped on different aspects of life in Istanbul. The word “Chief” is excessively used during food orders. People refer to strangers with family titles like Brother, Uncle, Aunt (Abi, Amca, Teyze), etc. Usage of these titles instantly creates a bond between two strangers, who otherwise do not know one another. This language phenomenon has been a part of Turkish culture since Ottoman Era. 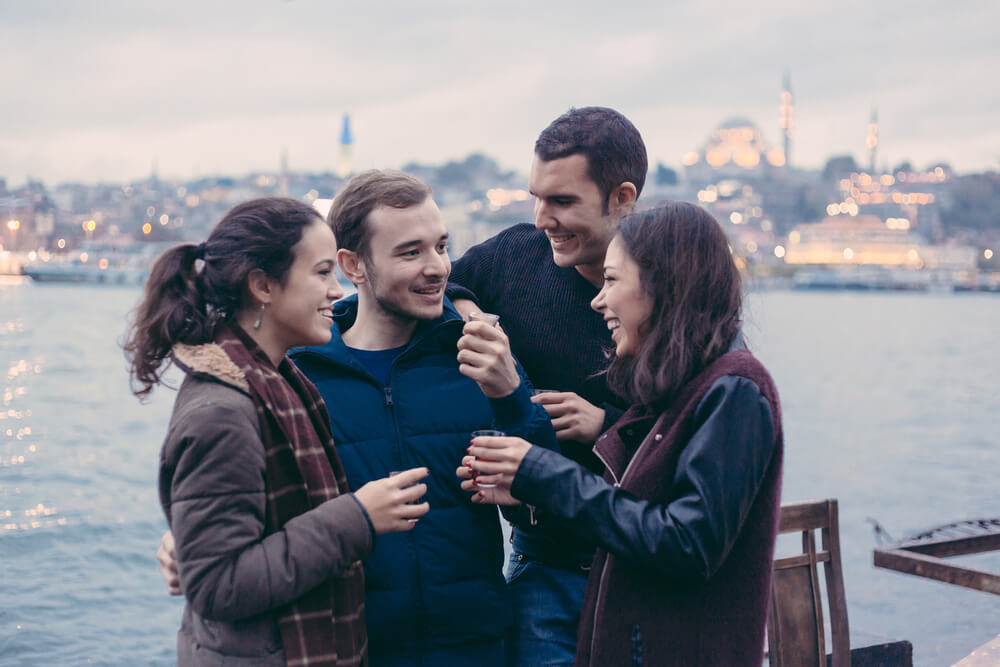 The desire to help those around them is in everyone here. Turks easily get hyped for every sporting competition, especially for soccer, even if they do not know the competitors. The latest gold medal winners of marathon runners were African descendants holding their Turkish citizenship for a few years. Yet, the community never once sees the competitors anything but one of them. Soccer teams who compete in global leagues with half foreign numbers are cheered like they are family.

There are mosques, churches, and synagogues that share the same neighbourhood. People in those streets act as a singular community, respecting one another and visiting one another during their separate holidays. While Turkey operates under Islamic holiday schedule, people will celebrate their friends’ holidays no matter the day. 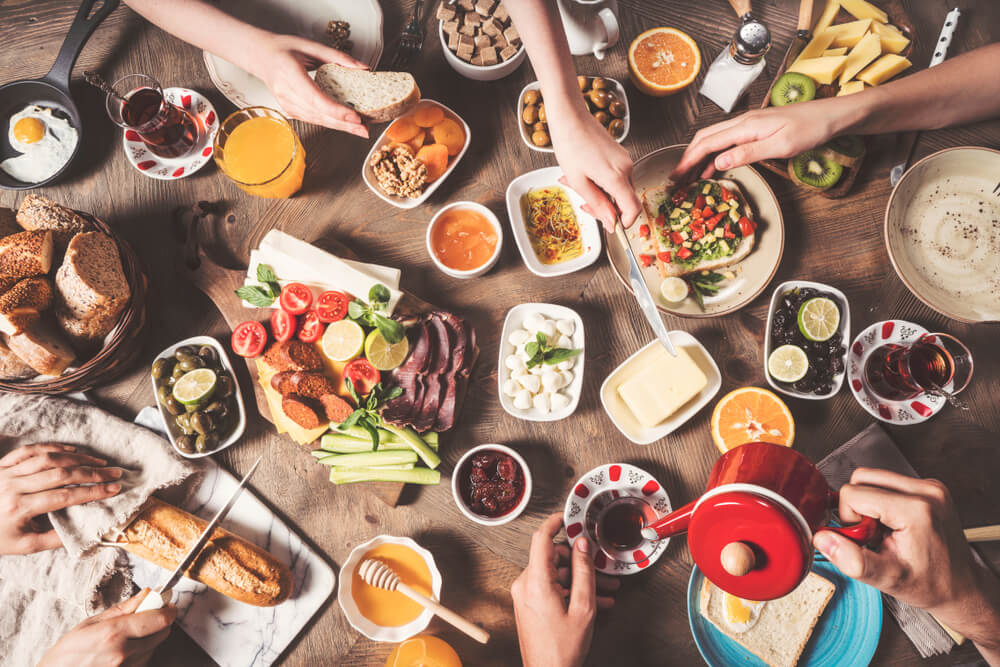 The Turkish food is both influenced by and influences the countries around the region. While the Black Sea countries share the kitchen, Anatolian spices touch the Middle-East, Mediterranean, as well as the Aegean coasts. You can find variants of Dolma (be it stuffed pepper, or wrapped around wine leaves), kebab, and various deserts in the neighbouring countries. All originated from Turkey. With such a wide range of food, it is impossible to stay hungry. As we thought it should have its own section, you can read more about Turkish Food below.

Reading Fortunes Off of Coffee

The Turkish Coffee, brew from a specific ground coffee, is offered to home guests or enjoyed as a mid-afternoon treat with a side Turkish Delight. Turkish Coffee has a long tradition of affecting the culture. Once it is drunk, people reverse the small cup on its little plate and wait out for the ground to move down. After the coffee ground cools down, the cup gets turned over once more. This act reveals shapes out of coffee that are seen as fortunes. Turks have mastered reading fortune off of these shapes. Neighbours visit one another to read the past, present, and future of one another based on how they drank the coffee. 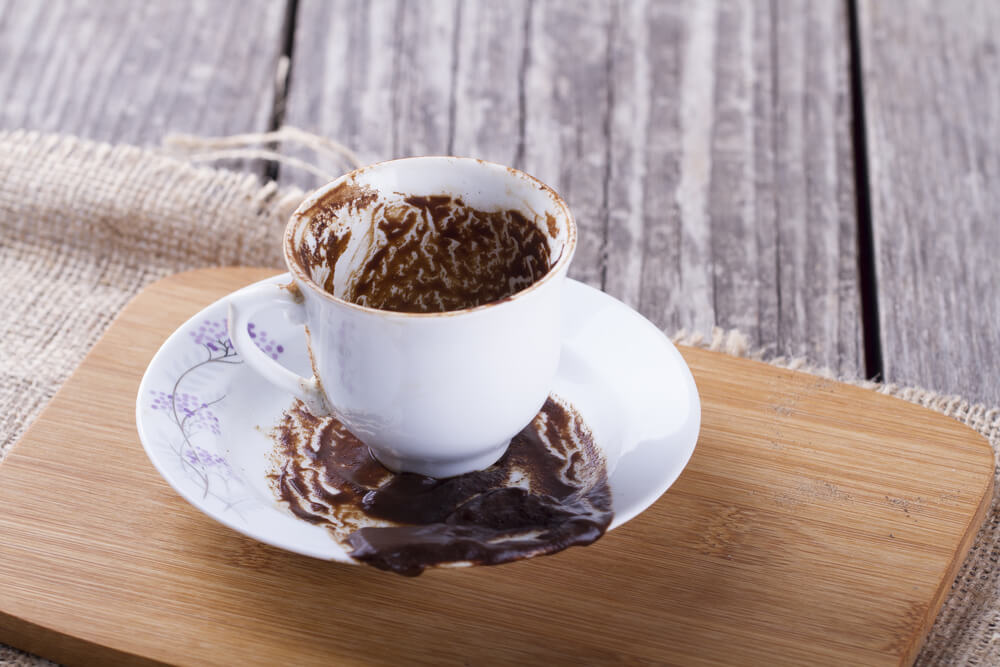 The Turkish Delight, served to guests, either on the side of Turkish Coffee, or with other desserts like Baklava, is made with gel-based starch, sugar, and a flavour of your desire. Called Lokum in Turkish, this award-winning dessert has been a part of the Turkish kitchen since the Ottoman Era Istanbul. While most famous and common ones are flavoured in rosewater, pistachios, and nuts, even a plain Lokum will leave you wanting just one more piece.

Located at such a geographic location, Turkey both shares from and influences the cultures around itself. The spices used in the foods, the ingredients, and sauces will all taste familiar to you, as well as captivating you with their region-specific serving styles. Northern regions are all famous for its seafood, while red meat leads the kitchen in the eastern corners of the country. Although both Eastern and Southern coasts also offer seafood, the side pieces and spices used are vastly different between the three sea regions. 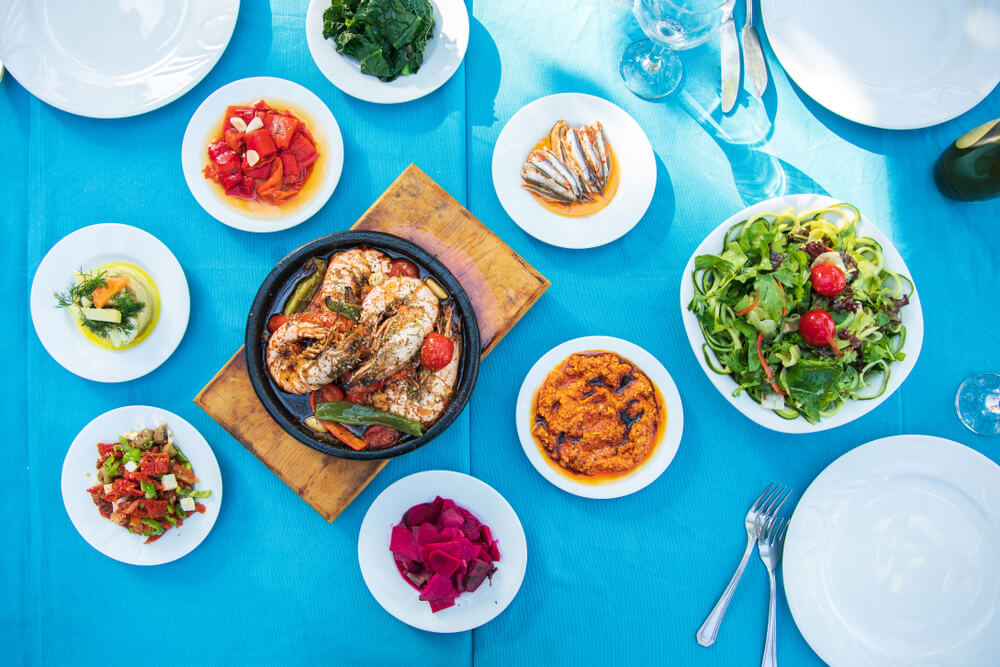 A Touch of European Aesthetics

The country shares tastes similar to what you can find in South-Eastern Europe since Turkey and Greece shares the Aegean Sea. You can find yogurt-based appetizers, as well as beaten eggplants and spices in both countries, served in similar manners on the side of seafood and chicken. The region is the origin place of the rice wrapped on wine leaves, called “Dolma.” The name also sometimes referred to peppers stuffed with rice. Anything you can stuff with rice is called Dolma, such as eggplants and cabbages, but “wrapped on wine leaves” version is perhaps the most famous one. Olive oil is a big part of the Aegean kitchen, as olives originated from the sea region. It is used on almost every food, and salad prepared with tomatoes, olives, onion, and cucumber makes every table a feast when dipped in olive oil.

Fish to Accommodate the Northern Cold

In the Black Sea region, food is fried during cooking to accommodate the cold and harsh climate of the North. The frying process is not the dangerous kind like fast food equivalent. The oil used is from the region-specific nuts. Since it is a fishing region, anchovy is the main food ingredient. There is a region-specific Dolma made out of Bonito fish. Mixed with the cabbages farmed there, the two create a taste admired by many through soups or fried rice. Cornflour is also another ingredient that shapes the Black Sea region. There are desserts made of it called Laz Halaweh (Laz Helvası) and Kukuca. A variation of Patty style food can be found there, called Laz Patty. On an interesting note, Laz is the name given to people from the Black Sea region, mainly to those from the Trabzon province. 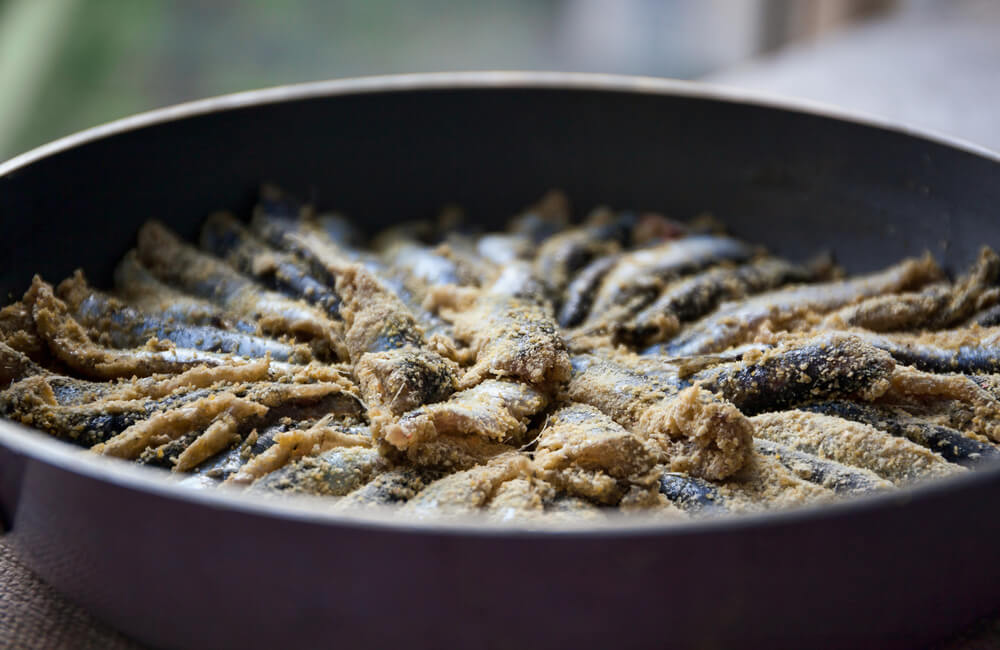 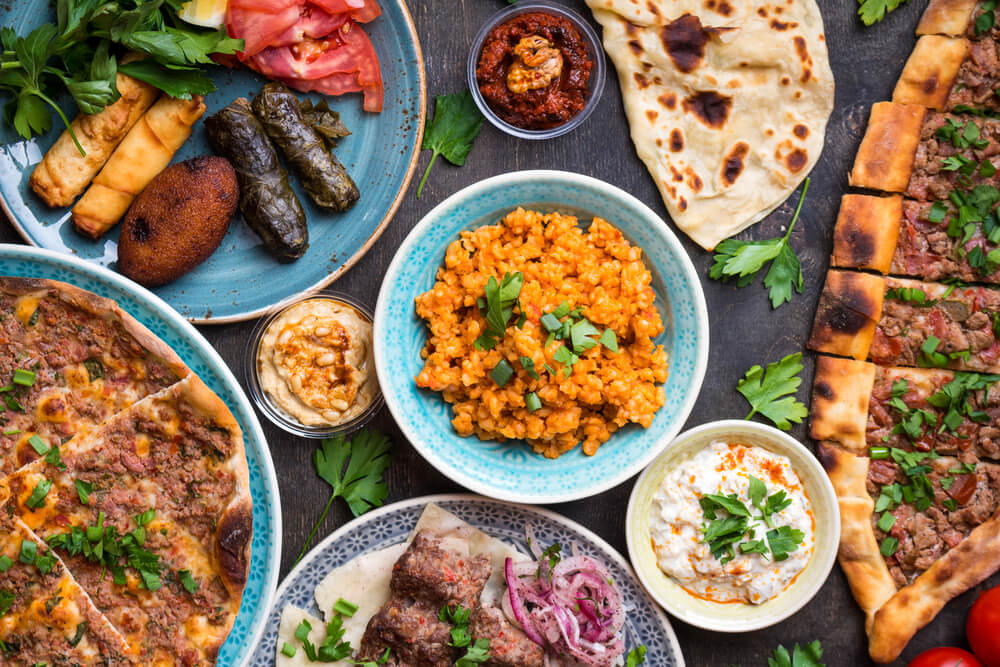 In the Eastern and Central regions of Turkey, more spices, as well as spicy foods, take over the light taste. Variants of red meat gets grilled then wrapped in Lavash or put in a half a loaf of bread, and served with rice. Eastern Anatolia is the birthplace of Kebab and Iskender. The latter is red meat thoroughly sliced from the döner meat, covered in tomato sauce, and topped with a spoonful yogurt. A spicy tomato sauce and yogurt combo makes another appearance on top of the world-famous Turkish Ravioli, called Kayseri Mantısı. Tahini is a big part of the desert culture, as foods usually need to stored in a cold and harsh climate in winter, and dry and hot in summer. It is the birthplace of Helwah, referred to as Helva in Turkish, as well as Baklava and its variants. The deserts there are usually topped with a pinch of dusted pistachios, since Anatolia is the birthplace of the salty treat.

Borrowing the Yellow Palette of Banana By Southern Coasts

By the Mediterranean region, food is similar to the Aegean side in looks, while being vastly different in taste. It borrows the wrapping pita bread and tomato pastes of Anatolia, while using the olive oil from the Aegean. Takes the pepper from the Black Sea, and creates appetizers from them similar to the Aegeans. Larger sized fishes can be found on the menu, since the sea is on the route of many migration path to Far East Asia through the Suez Canal. As the region is closest to the Asian trade routes, the Southern native fruit banana leads the dessert plates. Finike Banana Dessert, prepared by mixing ingredients such as starch, orange juice, and banana, in in every menu. 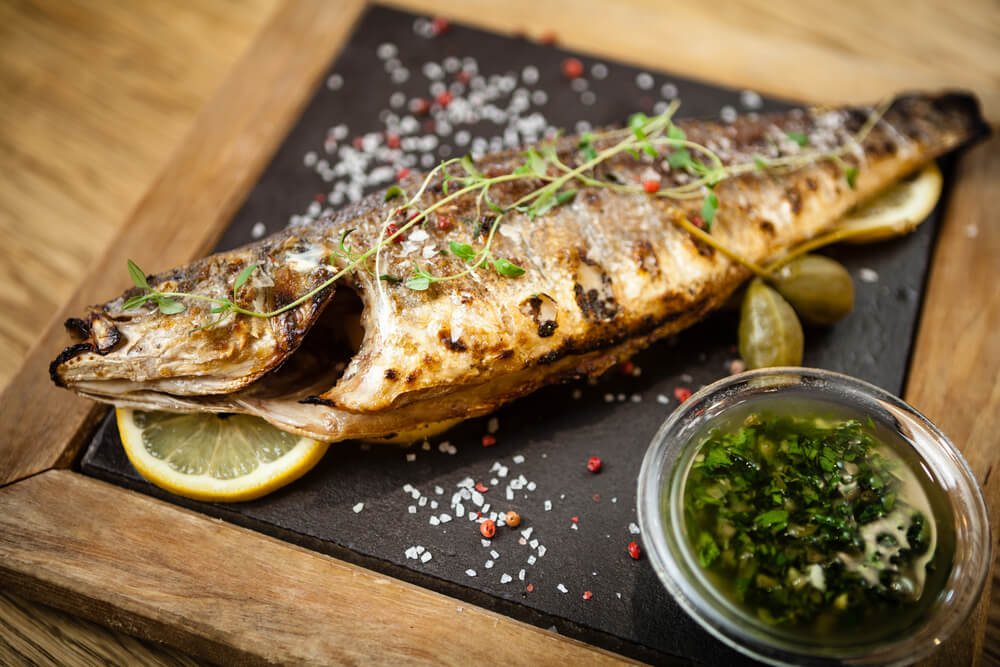